The Band returns to the Empty Bottle stage Friday March 17th to perform songs from all Dorian Taj releases. This will be very cool in the fact that also on the bill are Husker Dudes who are a Husker Du cover band whose songs hold a special place in D.T’s heart. It is also St. Patrick’s Day which is dear to the heart of Chicago. Also appearing will be Eric Mahle of the band Sunken Ships who will open the night with some solo acoustic jams.  Empty Bottle is located at 1031 N Western in Chicago.  www.emptybottle.com  Proceeds for this night will be benefiting Center on Halsted which you can read more about below.
Center on Halsted is the Midwest’s most comprehensive community center dedicated to advancing community and securing the health and well-being of the Lesbian, Gay, Bisexual, Transgender and Queer (LGBTQ) people of Chicagoland. More than 1,000 community members visit the Center every day, located in the heart of Chicago’s Lakeview Neighborhood. 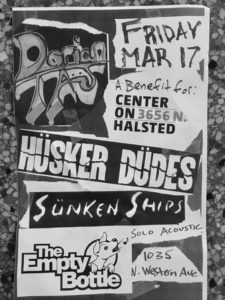 Dorian Anthony Alexander Tajbakhsh, better known as Dorian Taj, is a guitarist and singer/songwriter from Chicago, IL. He made his first records with the hardcore punk band Articles of Faith, whom he joined just prior to the recording of their first album, "Give Thanks" produced by Bob Mould. Afterwards, he played in the local noise band, End Result, appearing on their lone release, a 12" EP called "Ward" released on Steve Albini's Ruthless label.. He later formed a rock band called "Wait For Light". After living in Los Angeles for a time, the band returned to Chicago to record the debut Album at Phil Bonnet's Solid Sound.After a European tour Wait For Light disbanded. D.T. eventually began performing with a band under his own name, the longest being the the Aaron Bakker, Tom Atteberry, Alex Moore/Danny Severson incarnation. Releasing the Puppet Record(Joe Irizarry, John Hiler sessions), The Tobacco Record(The Dave Trumfio sessions) , and The Hating Game(Dan Dietrick, Ed Tinley, Jeff Boyd sessions).The current band which features Anthony Rubino-guitar, justin Loftus-bass and Danny Severson-drums are finishing the new album “Giant” which will be released in early 2014. You can check it out at www.doriantaj.com and hear some work in progress mixes of “between Angels” , “No Future”, and ” S&H Green Stamps below”. http://soundcloud.com/doriantaj/between-angels/s-BL4je http://soundcloud.com/doriantaj/no-future-kevin-jr-doriantaj/s-UcgPO http://soundcloud.com/doriantaj/s-h-greenstamps/s-vYCG1 Present members are: Anthony Rubino-guitar Justin Loftus-Bass Danny Severson-drums
View all posts by doriantaj →
This entry was posted in Uncategorized. Bookmark the permalink.